How To Create Simple Chord Charts/Lead Sheets For Studio Sessions

I’ve been involved in a wide variety of recording sessions over the years and when it comes to providing hired musicians with charts, it’s a real mixed bag. Some writers send over incredibly detailed scores, others will only provide me with MP3s. I’ve learned something new from every situation I’m faced with, but I can say with confidence that a recording session runs more smoothly if accurate charts are available. High quality charts allow everyone to spend their time making music, rather than editing or creating new charts during a paid recording session.

The structure of the song is a good starting point as it provides everyone with a road map of what happens when.
In order to make a chart simple and concise, abbreviations are often used such as:

Another handy thing to know if you are dealing with Brits like me is that we often refer to the bridge section as a “Middle 8.” Within a chart, I will abbreviate this as “M8.” Some people argue that a Bridge and a Middle 8 are two separate things, but trust me, if you’re dealing with someone from the UK, they are referring to the bridge 😉

Now that you have a structure in mind, let’s look at some of the options you have available to you for charting your music. Most of these examples deal with melodic instruments but could easily be applied to drums/percussion as well (although I mostly write drum specific charts in order to notate any fills or changes in the main drum pattern). 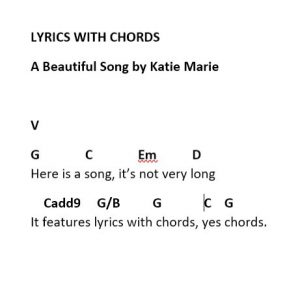 Almost all my students prefer this type of chart as they’re super easy to follow and pretty self-explanatory.
The downside to these charts is that it doesn’t show you exactly how the chords/melody fall within the bar which can be important for more complex parts. However, this is a great option if you’re not very familiar with music theory and want to create something to get the ball rolling. 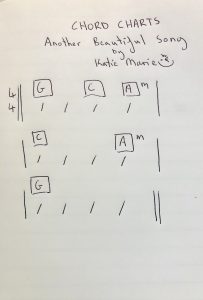 As you can see from my example, this is a song with a time signature of 4/4 – meaning there are 4 beats in every bar.
If you look at the first bar in my example, there are 4 lines under the chords. These are called rhythm markings and let the player know how many beats should be played for each chord. In my example above you’ll see that G has 2 beats, C has 1 and Am also has 1.

Another way people write rhythm markings is to make the first chord the first beat, so in the example below both the G and C chord have 2 beats each. 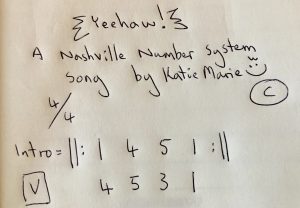 This is a beautiful and simplistic way of charting songs that allows you to change keys on the spot without having to re-write charts – something that can be extremely helpful when a song is still very much in the early stages of writing and arranging.

How it Works
Instead of using letters such as G or C, numbers are used to represent each chord.

Here is a 2 bar example of a verse in C major:

Using the table above, we can work out that the chords in the first bar will be C C F G and the second bar will be C C Dm Dm.
Now, here’s the cool bit; If we change the key to G major, but keep the same numbers:

Using the G major scale and the table above, bar one would be G G C D followed by G G Adim Adim.

The Nashville number system also has its own set of symbols to show rhythm values, for example; a diamond shape around or above a chord means that chord should be played once and then allowed to ring out. Another example is a ^ symbol above a chord, which means it should be immediately stopped. Personally, I prefer to use traditional notation to indicate these types of changes, but try experimenting and see what you prefer to use; I have only covered the very basics just to give you an idea of how the system works, but there are many wonderful resources available if you’d like to learn more. 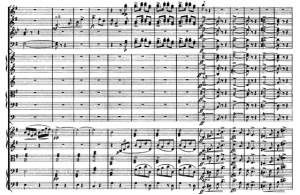 This is by far the most detailed way of writing out a song. You can include absolutely everything including melody lines, rhythm values, and so much more. If this is a route you want to go down, something that you might want to consider is that many musicians outside of the Classical music world don’t read music notation. Having said that, many professional players will be able to handle a music score and it is by far the best way to show every little detail note for note.

And that’s the basics for creating charts. What do you think? Did I miss anything? Do you have a favorite system for charting songs? Any recommendations for apps you have found helpful? I’d love to hear your thoughts, please feel free to share them in the comments below and thanks so much for reading this far!

About the author Katie Marie