The Art of Vocal Comping

This is a guest post written by AirGigs member Lydia Salnikova

As a child, I attended a classical music school in Russia, where my music theory foundation was laid. As a session singer (and musician), Iʼve had the privilege of receiving as good of a practical education as one can dream of – by having moved to Nashville TN in 1998 and having worked in various recording studios all across town for a decade or so. However, this particular subject [of vocal comping] has become the most relevant and important to me only in the last several years, since I have finally set up my own recording studio in my house, where I now do over 90% of all my recording work.

So, whatʼs so special about vocal comping (short for “composite”), is it good or bad, and how is it different from other approaches?

Well, the usual practice of recording vocals as a session singer in a Nashville studio is:

1) learning the song from a rough work tape and printing out the lyrics (in advance)
2) giving the producer a key for the song most suitable for my vocal range (which the instrumental tracks are consequently recorded in)
3) showing up (on time or, better yet, early) for the vocal session, where the producer and sometimes the songwriter client are present
4) warming up in the vocal booth by singing the song through a couple of times, which also gives the sound engineer a chance to get the vocal levels set
5) recording the “keeper” vocal take, usually all the way through
6) going back to any specific spots where I feel Iʼve made mistakes, or any that the producer or the client point out – and “punching in” a better snippet, until all the mistakes are fixed
7) adding harmonies (background vocals).

Singing harmonies is a whole other subject, an art of its own really, which I could write an entirely new article about – or a book! – so letʼs just focus on lead vocals for now.

So why the change? Why couldnʼt I continue with the same approach, which works so wonderfully well in most Nashville studios, in my own recording space? A few reasons.

First of all, in my studio I am all-in-one: vocalist, sound engineer, producer. When Iʼm performing the song, becoming one with the emotion and giving it all Iʼve got, I canʼt at the same time be making notes on the lyric sheet of which spots to go back to and “punch in”. Once the correct levels are set, the most creative thing to do is just to sing and sort out other details later.

Next, I donʼt always have the luxury of selecting a key most suitable for my range, as Iʼm often hired to add vocals to an already recorded instrumental track. So if certain parts of the song get somewhat low for my range – or, vice versa, a bit high – it is often a better idea to record those challenging parts separately: either early on, when my voice is the most relaxed and the lower notes are easier to hit, or later on, when my voice is more warmed up, open and soaring.

Another consideration… A lot of the times now, I donʼt work from a rough work tape. Sometimes I am only given a lead sheet (sheet music) and I donʼt get to hear the song sung, however roughly, before I dive in. And lead sheets can get very busy in nuance, so they are much easier to digest one section at a time. Besides, you donʼt want to catch the turning of the pages in the recording of your vocal take!

The last and the most important reason is: the client. These days, I almost always do my work remotely, rather than being in the same room with my clients. So unless the client is someone Iʼve worked with before and I know that they welcome (or even request) my own interpretation of their material, I have to assume that every note, pause, syncopation, scoop and slide specified is intentional and deliberate – and I try to execute them verbatim. And that is also better achieved by zooming in on each individual section.

So, as a session singer working out of my home studio, how do I record vocals for my clients?

By vocal comping, working with one song section at a time. 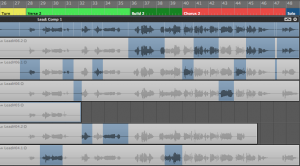 The first step doesnʼt change: I familiarize myself with the song thoroughly and print out the lyric sheet. Then I start a new session, load in the instrumental track, set the tempo and create my markers.

Next, I select a recording loop – usually, a couple of bars before the section Iʼm focusing on (say, verse 2) until the end of it. [By the way, I work in Logic Pro, so the exact technique might vary slightly in ProTools, Digital Performer, Sonar, etc. – but the basic idea is the same.]

Moving into my vocal booth, where I have an external monitor set up to see the session and a Bluetooth mouse / keyboard, I put on my headphones and press “record” (the levels donʼt vary much from session to session, since my voice is fairly consistent). And then I sing the heck out of that verse 2!

The process repeats for the next section. I usually record 5-6 takes of every section. Sometimes less, sometimes way more. I continue singing until I feel like Iʼve captured the “magic” take, then I do one more to seal it in. By the time Iʼm done recording the song, I usually have anywhere from 30 to 100 little takes, tied to specific spots of the song. Very important: remember to save the project often!!!

The actual comping may appear less creative and very tedious to some, but I happen to enjoy it. Itʼs a bit like sculpting: adding more of what works and chipping away at what doesnʼt. I go from line to line, listen to what Iʼve got in each take, and then switch between the takes as needed. Sometimes I even switch in the middle of a word! Whatever helps create the best performance and still sounds natural and seamless.

As far as making it seamless, itʼs a skill one gets the hang of, the more you do it. There are a few little tricks I use, such as cutting in between breaths, or right before a word, or in the very beginning of a plosive (“p” or “b”)… The most forgiving and flexible are the sibilants – you can often switch right in the middle of an “s” sound, since it is comprised of mostly noise without much pitch to it at all.

Sounds like a very time-consuming process? Yes, it can be. But the end result of being able to deliver to the client a well-crafted, polished and mixing-ready comped vocal track is worth it.

Is it good or bad to comp vocals in such a way? I suppose, an argument can be made that the most natural and moving vocal performances are those recorded in real time and in one take. After all, Ray Charles or The Beatles didnʼt do any vocal comping or tuning!

And there is truth to that. Few things are as inspiring as a dynamic live performance, when the singer takes you on a journey, pulling you in from the first note to the last.

But music is art. And art doesnʼt thrive by following rules. Art explores, art pushes boundaries, art discovers new and different forms of expression. And that is what, to me, vocal comping is: a different form of expressing and capturing a vocal performance. And if it sounds good to the listener – it is good.